The impetus to create an artwork is usually something futile, a few swipes on the canvas is often enough to start the process. Rarely do I have a plan of action or a specific example in mind. Gradually, by trial and error, the ultimate form of the work gains shape in the course of the creative process.

Most of the times a painting, collage, assemblage or wall object arises in a organic way, while I am busy combining materials that have been collected by me in all kinds of ways through certain methods and techniques and  testing them for their formal effect.

In recent years I have focused on the genre of landscape painting, a wide field that is easily accessible: a horizontal line on the canvas suggests a horizon, two horizontal areas of color a complete landscape. In this genre I am involved, among other things, with the interaction between elements from the  (new) romantic landscape painting and elements from the minimalist or abstract expressionist angle 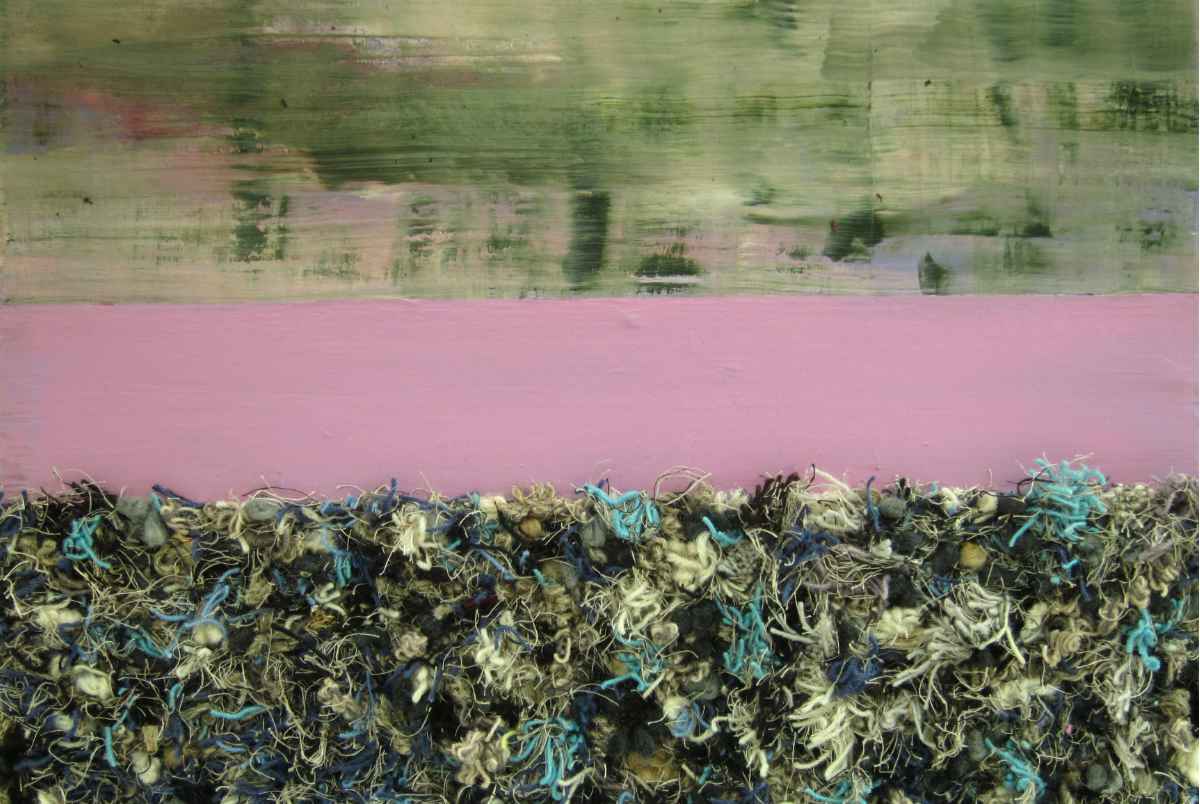 When a painting is finished, it starts a life of its own, independent of its maker. The intimate relationship during the creative process gives way to that of viewer and artwork. As a viewer, the maker of the thing does not differ essentially from any other viewer, except that he is carrying with him the memory of the genesis of this piece of art. This memory no doubt colors the way he views the image. The view of each spectator is formed by his own specific experience and knowledge and is in principle no more or less true than that of the artist as viewer. It is therefore up to the viewer to decide whether anything I write here should play a role in the appreciation of my work.

The relatively small painting has a landscape format (40 x 50 cm). It consists of two equally sized, horizontal bands with a narrow band in between. Format and composition suggest that it concerns a fairly traditional, albeit abstracted representation of a landscape with a foreground, middle ground and background. The background is not entirely opaque, the paint applied is later spread out, horizontal lines, which suggest a passing landscape, an illusory depth.  The narrow middle ground is completely opaque, monochrome and smoothed out, image and medium coincide here. The foreground, finally, consists of applied tufts of wool, pieces of deep-pile carpet, elements that emphasize the physical existence of the painting as a thing, as an object. The painting therefore has an ambiguous, hybrid character, oscillating between figuration and abstraction, imaginary space and sculptural surface.
The middle ground can be seen as a border strip or as a transition area between the more painterly and the more sculptural zone. This sculptural foreground explicitly opens up to the exhibitions space in which the painting hangs and, through its tactile surface, invites the visitor to look with his hands. At the same time, like  the repoussoir in traditional landscape painting, the entire foreground  functions as the entrance to the painting for the viewer.
When the viewer moves parallel to the painting or when the lighting conditions change, the appearance changes most in the part of the canvas with the pronounced texture. If the viewer moves even more to the right or left, one of the sides of the painting will also come into view (the painting is not framed), with traces of paint or other material used during the making of the work: the painting,not only a thing, but also and above all, a made thing.